There is this thing in Norway with Marius. Named after Norwegian pilot, skier and actor (in that order) Marius Eriksen, this pattern has been around for over 60 years. It is considered to be Norway's most popular knitting pattern, which means they put it on everything: sweaters, underwear, pot holders and blankets, but also non-knitwear like mugs, paper napkins, mouse pads and muffin cases. Just google "mariusmønster" and be amazed by the idea of being able to Marius-ize your whole wardrobe. And house. And everything else.

Maybe a pair of fingerless mittens is enough for the moment. 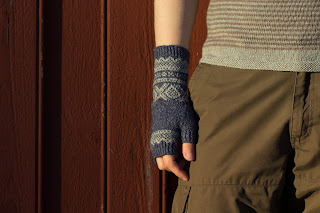 Using Holst Samarkand (now discontinued)* and 2.00 mm needles, the mittens are very light, but also surprisingly windproof. The stranded colourwork adds a bit of thickness at the wrist, while the palm remains plain to show off the beautiful, tweedy texture of the yarn. 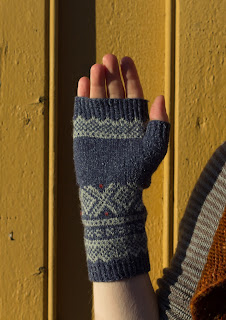 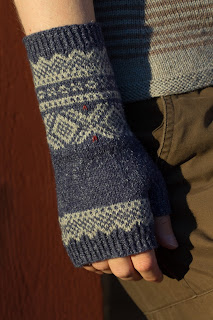 To update the classic pattern for a modern and more minimalistic feel, I used muted shades of blue and grey for the main pattern and worked just a few duplicate stitches in red as a tiny nod to the original colour scheme. 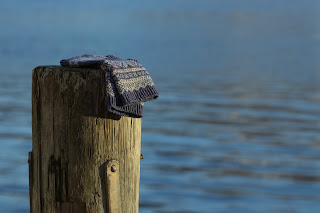 As with the Brua Cowl, the pattern for the Fingerless Marius Mittens is almost ready and waiting to be tested. If you are interested, please drop me a note in the comments or send me an email. The pattern is written in English and will be provided as a PDF. Considering Holst's great range of colours, you could probably knit a different pair for each week of the year, secretly Marius-izing your wardrobe one (or two) mittens at a time. Have a great week!

* Holst came up with a new yarn named Tides, which has almost the same fiber content (70% wool, 30% silk) as Samarkand (75% wool, 25% silk) and the exact same meterage. The pattern includes shade names for both Tides and Samarkand.
Eingestellt von Teleri um 20:01

Teleri
Boredom's not a burden anyone should bear.

A stray German living in Norway. Hating the bread here, but loving the butter. Linguist by profession, maker by heart.

If you have any questions, suggestions or comments, you can drop me a note on Ravelry (username teli) or send an email to info.with2hands@web.de